Home » Rhapsody of a Revolt: 19 years of SupportoLegale +1

Rhapsody of a Revolt: 19 years of SupportoLegale +1

Rhapsody of a Revolt: 19 years of SupportoLegale +1

Summer 2001: History makes its way through the streets of Genoa.
Summer 2004: Among the bits and pieces of what Genoa days had represented, the SupportoLegale story begins.
Back in 2004 Genoa Legal Forum’s legal office asked the Italian Indymedia network to help out in reviewing, analysing and organising the huge amount of audio, video, photo and written documents involved in the building up of the court cases connected to the events of Genoa G8 protests.

A wide-ranging and mixed group of comrades and media-activists took up the project. They soon discovered that matching Indymedia’s slow and participative decision-making processes with the needs of the quick and twisting turns of the court cases had many challenges. As this group became increasingly smaller, SupportoLegale was born as an autonomous project to specifically work on the Genoa G8 court cases and on the solidarity actions connected to them.

SupportoLegale’s history is a kind of rhapsody. One of embattled perseverance, through years of work in the law courts, as consultants of the Genoa Legal Forum lawyers and as activists coordinating the fundraising, communication and information effort on what was happening during the trials. Soon SupportoLegale grew and became involved in other court cases not necessarily directly connected to Genoa but through a similar thread of state repression. When the G8 cases came to a conclusion convicting ten people to more than 100 years imprisonment, SupportoLegale decided to focus on economic and political support for the convicted activists.

SupportoLegale organised fund-raising concerts and other events, produced t-shirts, books, comics, music CDs and used what resources it could to prevent people’s attention from slipping away from what the Genoa G8 protests meant and what the legal follow-up had been.

In 2007 SupportoLegale called for a big demonstration in Genoa to counter the 100 years imprisonment handed down to fellow comrades. 100,000 people marched behind our banner: WE HAVE NO REGRETS.

Now we are here. 19 years have passed, one more and in 2021 it will be 20. Thousands of voices, events, words, opinions and histories will crowd this anniversary. Many of those will be very far from what we would like to hear or see.

But it is now time for SupportoLegale to draw to a close, however we won’t go without having our say. We are preparing a documentary movie, new comics anthology, a graphic poster as well as contributing to Zapruder magazine’s Genoa anniversary issue.

This is our last effort to have everyone remember that memory is a collective tool that needs to be constantly fueled and tuned.

DONATE and support us! 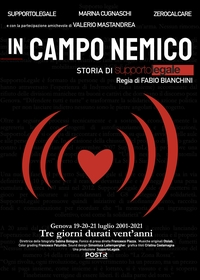